How Chamber Offices are Changing

From coffee shops to co-working spaces, chambers are transforming their physical footprints. Read about the innovative ways your chamber peers have transformed their offices to meet the needs of their members and provide new opportunities for convening and collaboration. This update features six chambers:

In 2018, the Baton Rouge Area Chamber (BRAC) opened the doors to its newly renovated headquarters, the David E. Roberts Center for Economic Development. Prior to the $3.5 million remodel, BRAC President & CEO Adam Knapp often referred to the building as "the Death Star" because of its low ceilings and black exterior glass. “For an organization as forward-thinking as BRAC, our office building for the past 50 years had been decidedly drab. We wanted a contemporary office that reflected BRAC’s purpose and personality, especially as we further our economic development efforts,” said Knapp.

Today, the Roberts Center reflects BRAC’s redefined role from a traditional chamber of commerce into a dynamic, regional economic development organization. The building is an inviting resource for the local business community, housing valuable small business and entrepreneurship services like the Louisiana Procurement Technical Assistance Center. 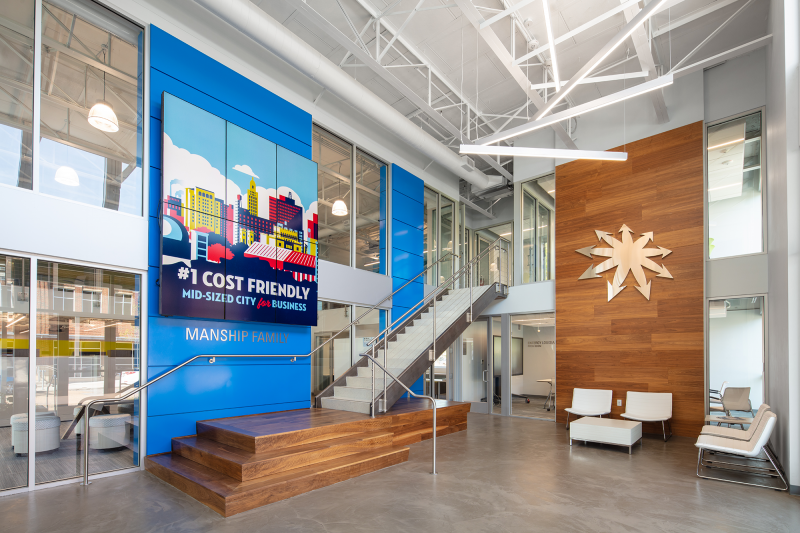 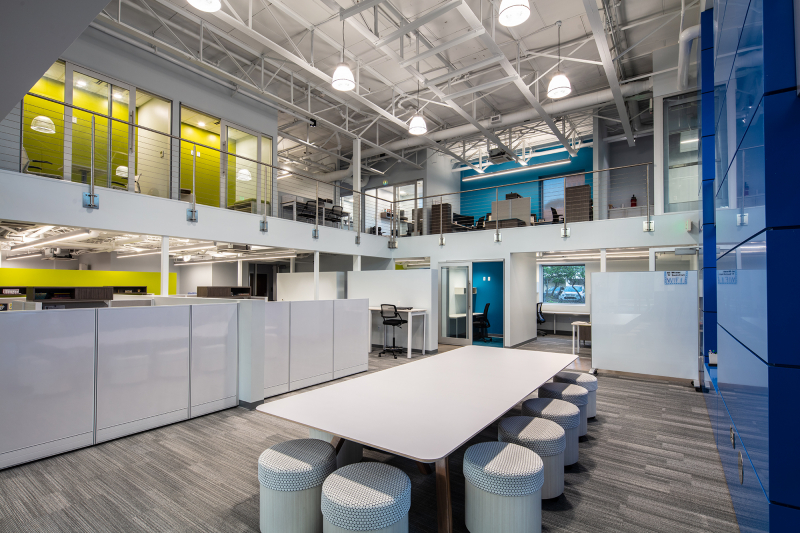 After thinking through different visions for its space, the Bonita Springs Area Chamber quickly realized that it had a great asset with its existing building situated in an ideal location. So rather than relocate, the chamber decided to renovate.

As the chamber planned the renovation, leadership knew that the organization was good at bringing people together, creating conversation and forming meaningful relationships. But they were missing a place for all of these things to happen. “We often heard from our professional services and b2b members that they really needed a place to meet,” said Tiffany Esposito, CCE, IOM, the chamber’s president & CEO. “It dawned on me after I had three meetings at Starbucks in one day.”

And so, The Hub was born. The chamber took its visitors center area—which became less of a resource with the rise of the internet—and converted it into a space that is both a member benefit and an asset for the entire community. “It is a space for people to work, meet and connect,” Esposito said. The Hub features an open, café-style seating area, coffee, WiFi and two semi-private office suites for individuals to use for small meetings or remote work—all at no charge. “We intentionally developed it this way so that it could open a pipeline for new relationships for us and for our members. It’s been very well received by our community and given us a way to engage more people in the way they want to engage without investing a lot of staff time,” said Esposito. 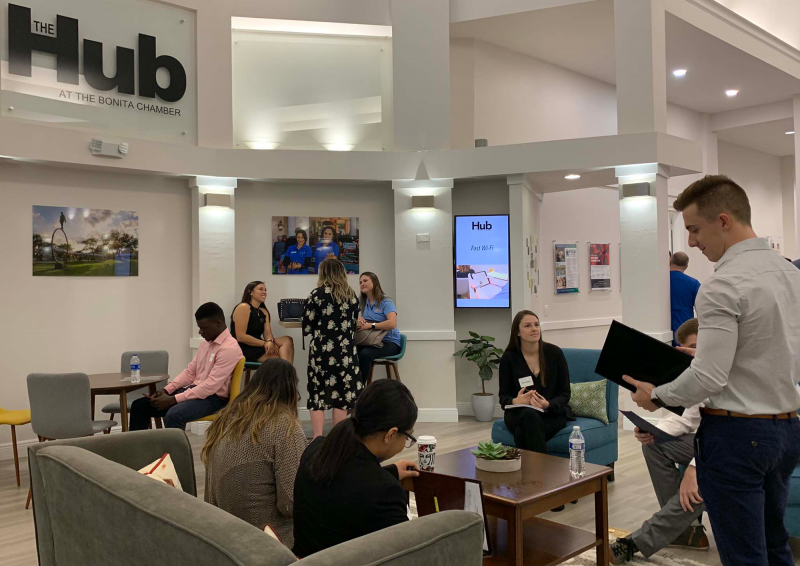 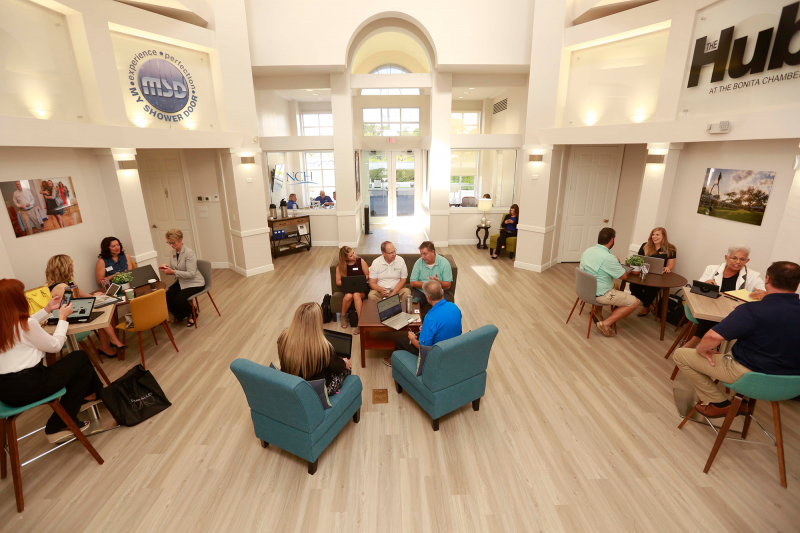 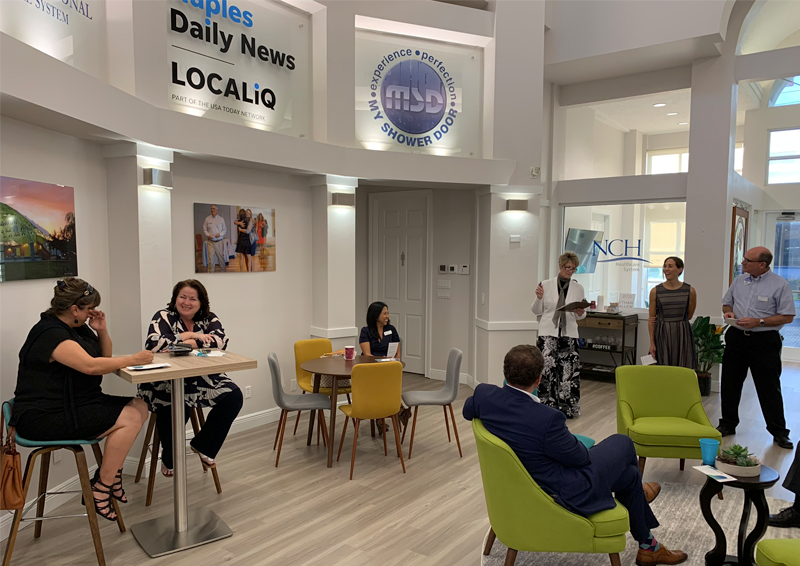 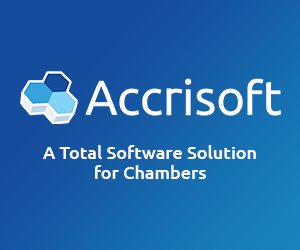 As the Branson Lakes area’s economy has grown and diversified, the chamber’s ability to expand programing and house staff was limited by the layout, location and size of its former office space. “We had one meeting room for 34 staff members, community leaders and others to use,” said Jeff Seifried, the chamber’s president. “Our team would often meet off-site. We couldn’t continue this way. We realized that with so much business to conduct, we should be conducting it in our own building and show what we have to offer.”

After looking at about 20 sites, the chamber selected a three-acre property that fronts a major traffic artery connecting two major thoroughfares – ideal for the chamber’s welcome center. After nearly five years of planning and construction, the chamber opened its new 18,000 square foot headquarters last summer. Today, the facility serves as a new front door for two of the area’s most vital economic drivers – tourists and visitors, and Branson’s vibrant business community.

Featuring plenty of natural light and flexible spaces, the building fulfills the community’s need for meeting space during business hours, including a new multipurpose room that seats up to 110, four conference rooms and a board room. Each contains a large wall-mounted screen for wireless presentations, as well as video/teleconferencing capability. All the meeting rooms have touch screen panels that integrate with Outlook calendars for room scheduling. These rooms are available for community use with a rental fee; chamber members may use them at a reduced price. 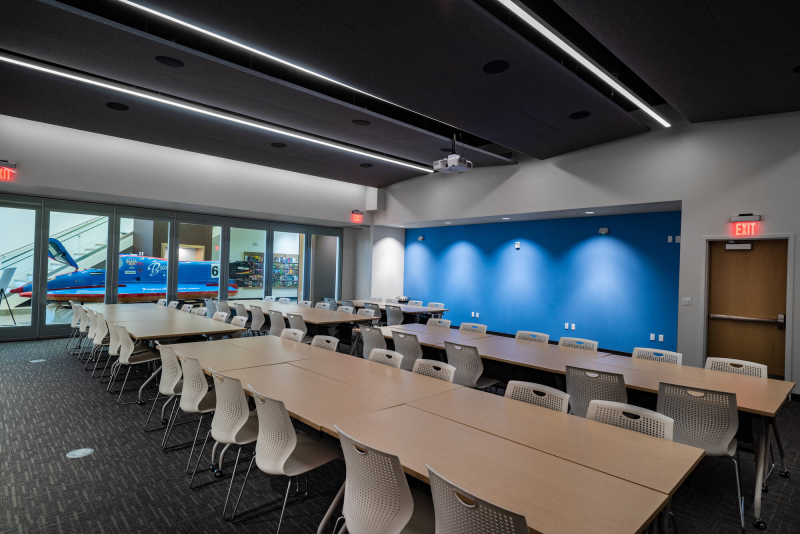 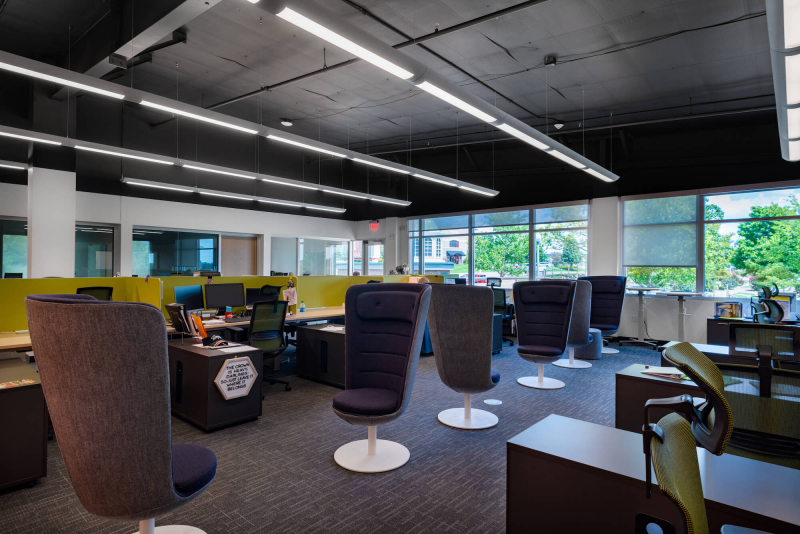 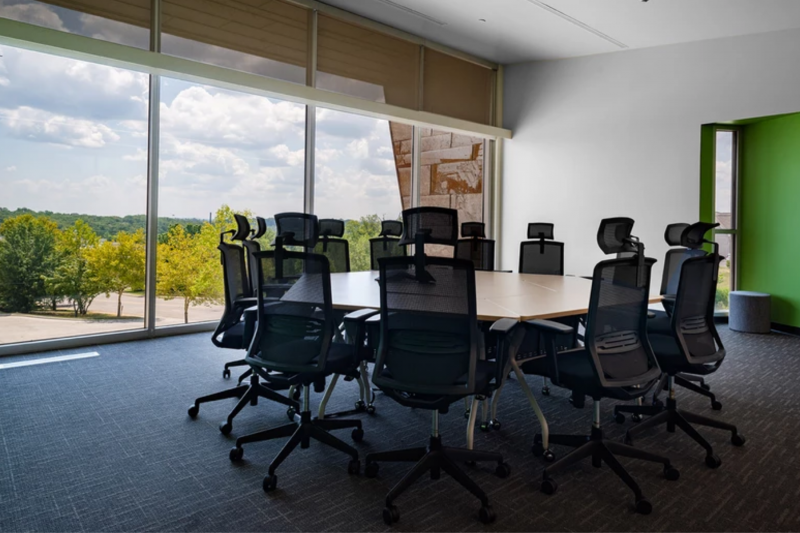 The Durango Chamber broke ground on a new building in 2018 after the city of Durango decided to expand the park where the chamber had originally been located in a tourist area. While the chamber owns its new 2,900 square foot building, they are leasing the land on which it sits from the city for $1/year for 25 years. They relocated to an area where an Urban Renewal Authority is being formed and where old buildings are being renovated. “Ironically, it’s where the old chamber was located in the 1960s through mid-80s,” said the chamber’s Executive Director Jack Llewellyn. The chamber worked with its builder to value engineer the custom-designed building, reducing the costs from original bids of $1.2 million to $800,000.

The move has boosted the chamber’s non-dues revenue. For instance, the La Plata Economic Development Alliance moved into the building and rents space from the chamber, making it a one-stop business information center. Members and non-members can also rent co-working space by the hour or a board room that is outfitted with WiFi, state of the art technology and access to a kitchen.

“Having a new building is wonderful. Our previous building was showing its age and needed upgrading,” Llewellyn said. 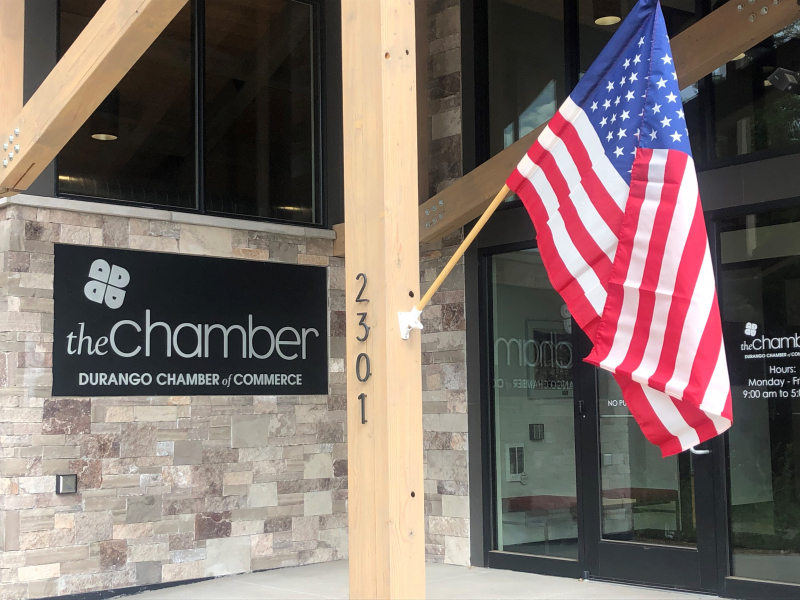 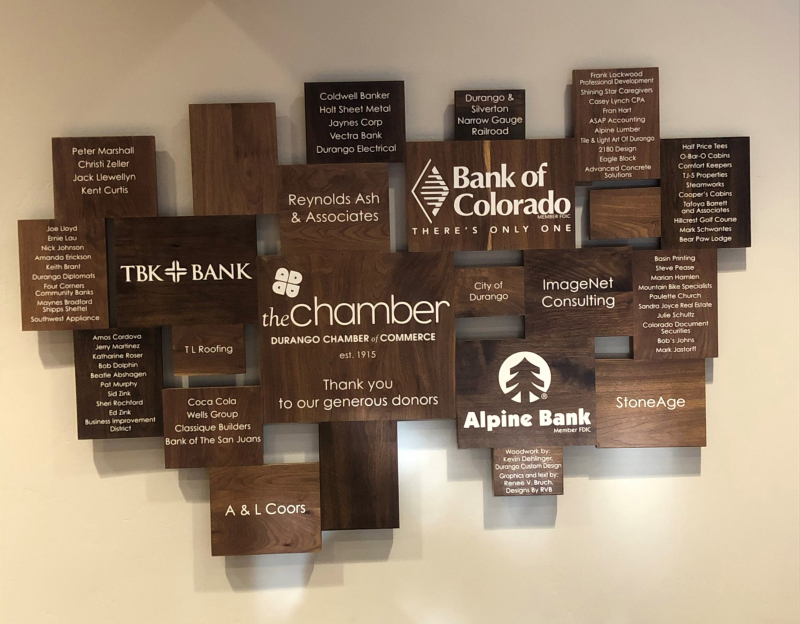 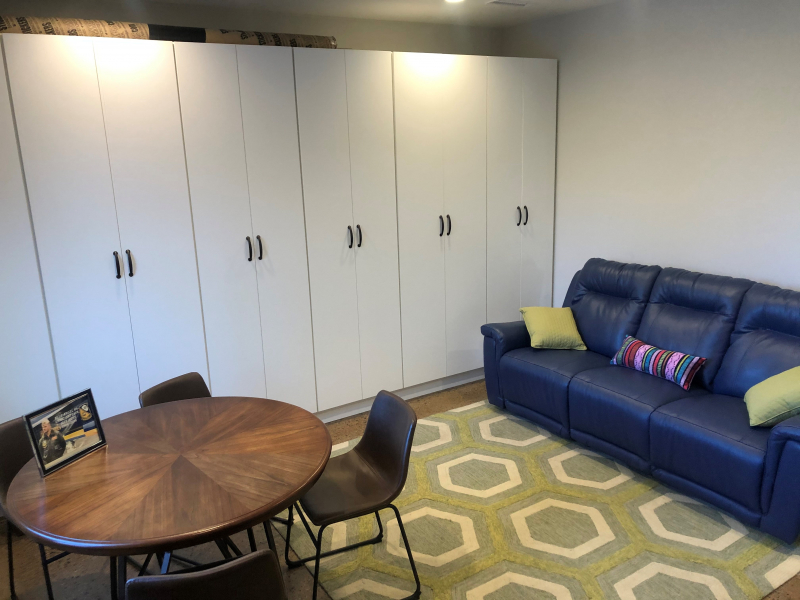 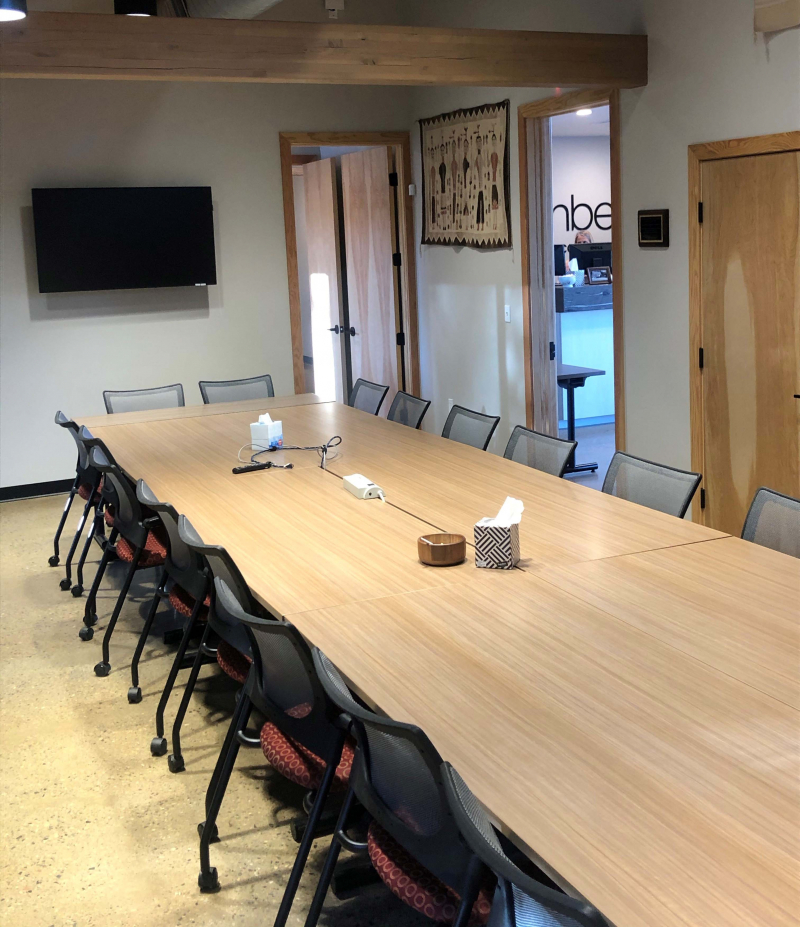 For the 132-year-old Grand Rapids Chamber, a building move was more than just a simple relocation. “We saw the move as an opportunity to engage members, grow membership, increase revenue and provide a space for innovation and even greater customer satisfaction,” said Grand Rapids Chamber President & CEO, Rick Baker.

The goal was to become “the physical epicenter for business activity in Grand Rapids.” The result is a 10,000 square foot multi-functional and purposeful space. The new office cultivates an environment that is welcoming to all. It features a first-floor work café with complimentary WiFi and coffee provided by a local member. Chamber members enjoy access to the café as a member benefit and may rent it out after hours for receptions. The second floor features a conference center with a catering kitchen, flexible meeting space, telephone rooms and an open-concept workspace for chamber staff. According to Baker, all the costs of the move were paid through naming rights and sponsorships.

“We measure and track activity to show the value of sponsoring these spaces. In the first 18 months, we’ve had nearly 15,000 visitors,” said Baker. “Before there was no reason to come into the chamber office. Now we have people joining the chamber because they see the space and what we offer as a value of membership.” 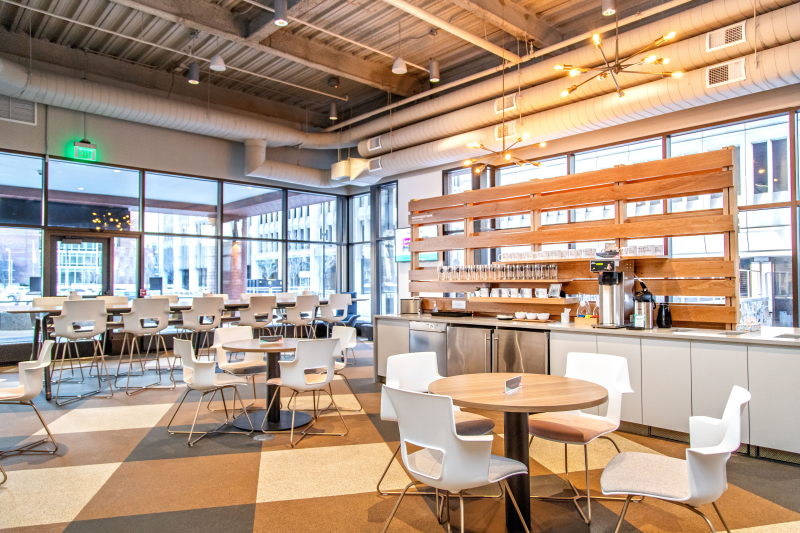 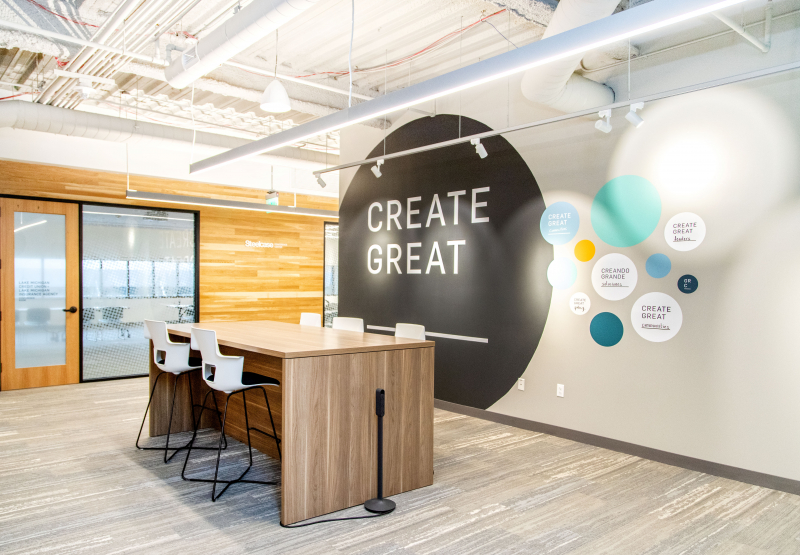 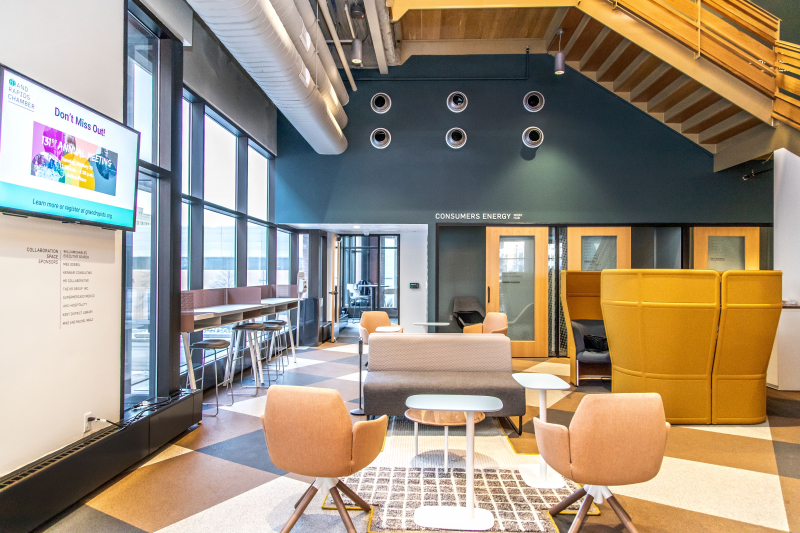 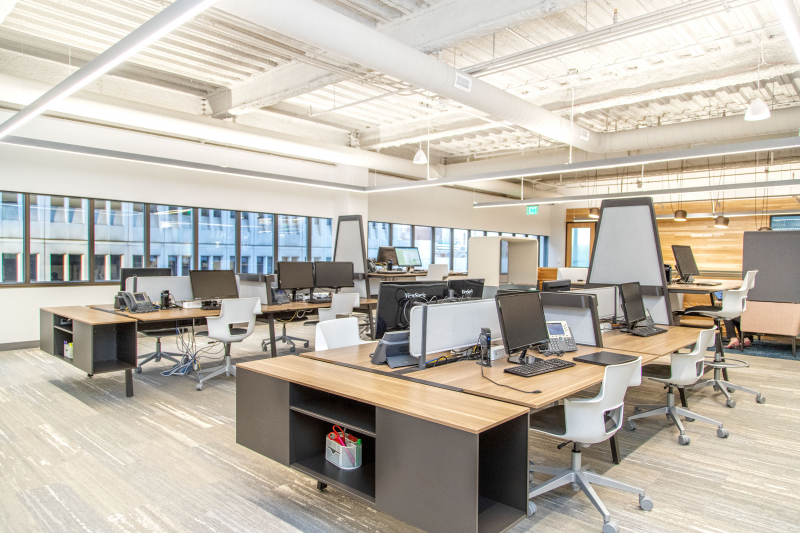 After being at its previous location for nearly five decades, the leadership at the Greenville Area Chamber decided in 2017 that change was overdue. “The chamber has always been a place to convene our business community, but we wanted to move to a place that was reflective of where our organization and our community was headed,” said Carlos Phillips, president and CEO of the Greenville Chamber.

The new building, in the heart of downtown Greenville, includes several meeting spaces and features two conference rooms and one large boardroom equipped with cutting-edge technology. The chamber’s vision, mission, focus areas and values are displayed prominently throughout the space. “These large graphics are not only the embodiment of our brand, but they also tell the story of our ‘why’ to our visitors. They highlight the chamber’s priorities and aspirations for our community,” added Phillips.

The new office’s design has also revolutionized team collaboration. According to Megan Campbell, the chamber’s marketing and communications director, “The old space was not designed to bring the team together. Now, we interact in spaces that inspire creativity and collaboration. We brainstorm together in the new conference rooms, we meet-up for lunch in the work café and we have multiple work-space areas so that we are not tied to a desk if we choose.” 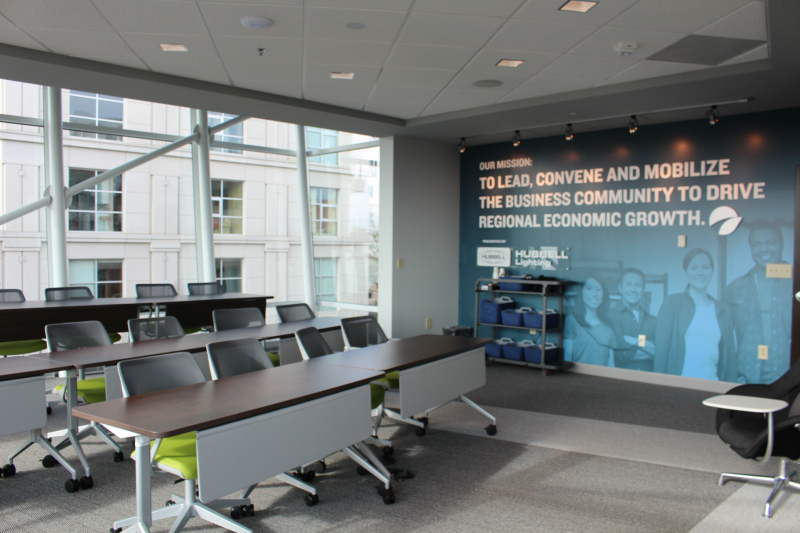 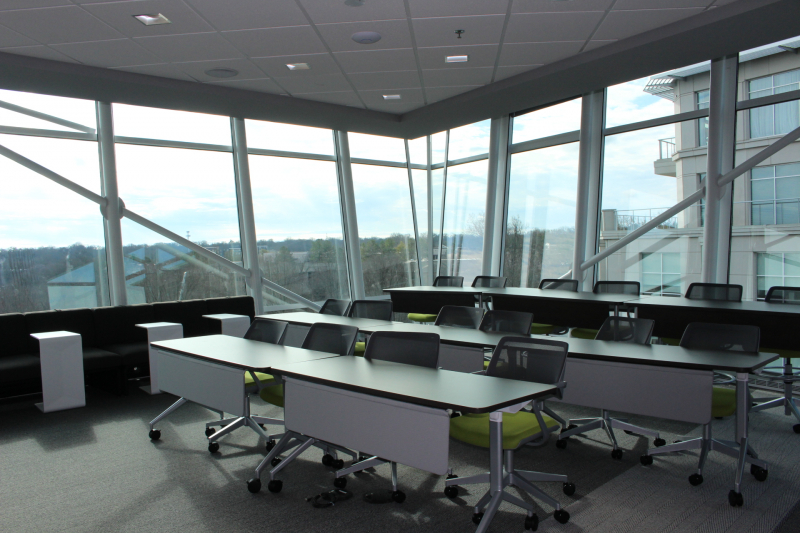 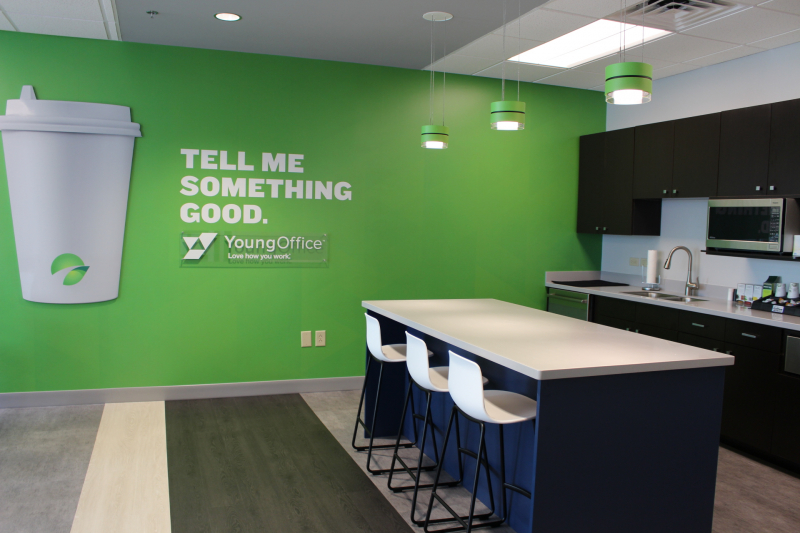 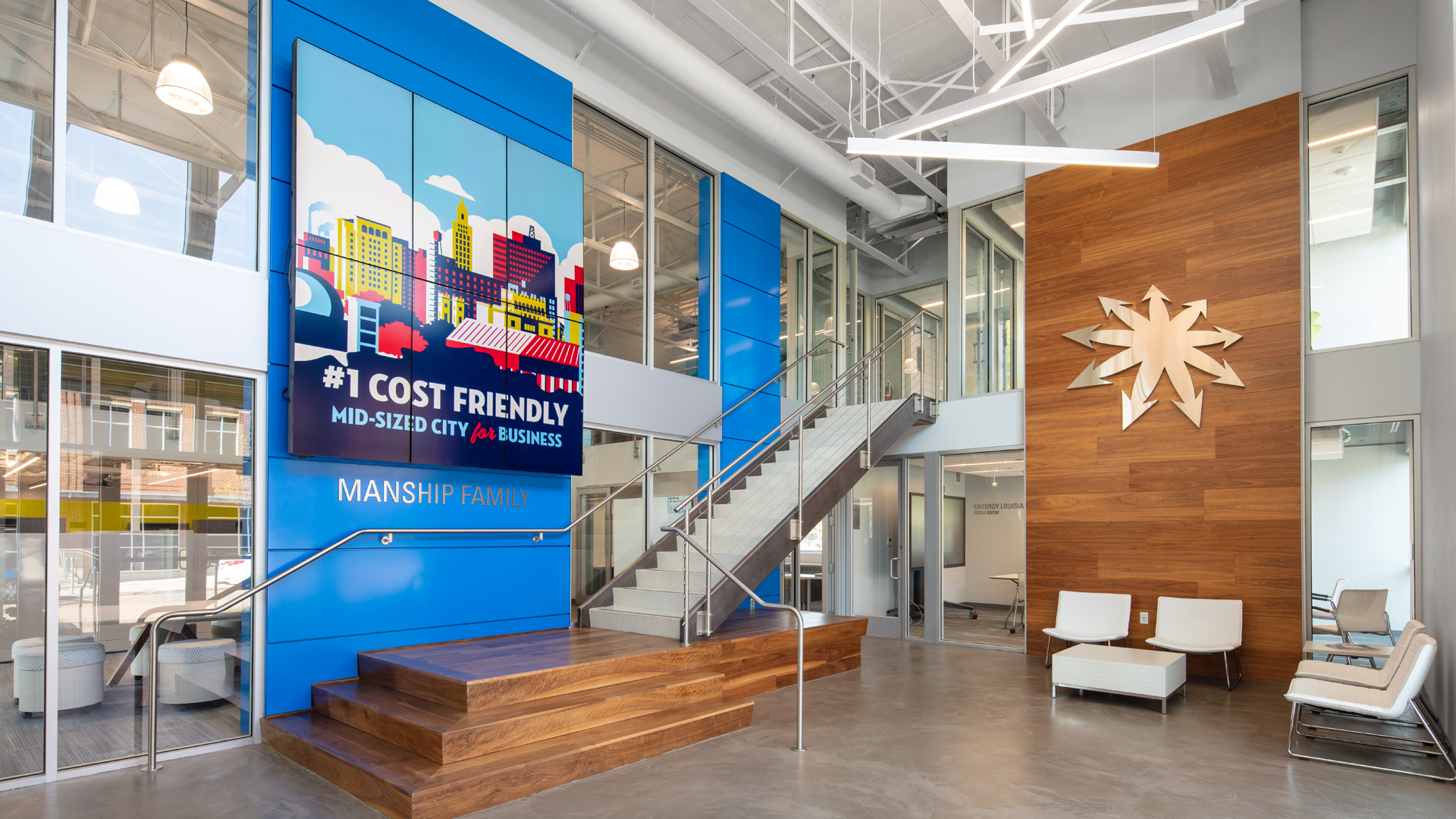